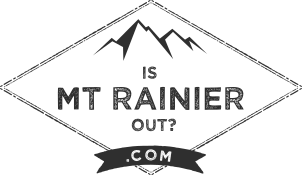 What's All This About?

Mount Rainier made its first appearance on the Twitter feed on April 29th 2014, and the website was launched in January 2016.

Until I write more about it, you can read about the story behind the feed on The Evergrey: Here’s why this Seattleite tweets a daily answer to 'Is The Mountain Out?'.

The Space Needle provides most of the images for the Twitter feed. Beyond being Seattle's famous tourist attraction, they've really embraced digital experiences - for their real and virtual visitors. The Panocam is a live 360 view of Seattle's skyline, but you can also scroll back in time to see way more than just the slice that this Twitter account fixates on.

The logo is based on elements from designer Nicky Laatz, in her 6 Vintage Logo Templates work.

The site's favicon was created for the Mozilla Foundation, and licenced under CC BY 4.0

My name is Rob Ousbey, and you can find me on Twitter: @RobOusbey